It was indirectly thanks to a conference in 1994 celebrating the Centennial of the Geological Society that the Fossil Fuel Foundation (FFF) of Africa came about.
During the previous decade or so, there had been a lack of interest in coal activities. Many coal research and analytical laboratories had been closed and highly experienced personnel had left the industry. Universities had ceased to teach coal science and technology at undergraduate level in virtually all disciplines including those required in geology, exploration, beneficiation and utilisation. Mining and mining safety had become the only topics of academic interest.
A call for papers in coal and related topics at that Centennial conference generated thirty five papers. At the close of that conference, twenty people met to discuss the need to create an association for the express purpose of sharing multidisciplinary technical information on coal. The Fossil Fuel Foundation was born.

The Fossil Fuel Foundation is an internationally recognised institution providing knowledge of the Southern African fossil fuel and related energy industries. This is achieved through a network of specialists, the hosting of conferences and industrial courses, the distribution of information for the promotion of the energy resources and the understanding of the technical requirements of the industries in the region.

To achieve the above, the Foundation undertakes the following:

Creation of a strong network within the coal, alternative fossil fuels and related energy sectors and those in the mining, production, heat and power generation, metallurgical and petrochemical industries
Maintains a centre to coordinate this national/regional forum of multidisciplinary professionals from government, industry and academia.
Hosts conferences and related events for the optimum transfer and exchange of state-of-the art technical information between all relevant disciplines in the fossil fuel and related energy sectors.
Manages and coordinates special projects
Promotes education at all levels for the benefit of the technical and lay public including government, industry, academia and schools’
Maintains an information centre for the distribution of relevant data in the coal, fuel and related energy sectors.
Contributes to the development of national strategic policies affecting the production and use in the fossil fuel and energy industries
Encourages clean coal technologies while recognising appropriate renewable energy options in all producer and user industries.
Promotes safe and efficient practice in the production, extraction and use of coal, carbon and alternative energy resources.

The Foundation’s Crest represents many of the stake holders in the fossil fuel industry.
Balancing above the frame of the crest a spade and shovel acknowledge the input of the geological and mining industries.
Set against the clear blue sky a lump of burning coal indicates a clean atmosphere, energy for industry, and warmth in a domestic setting.
Below this, on green rehabilitated land, a lightning bolt, a drop of oil and an anvil represent electricity, and the petrochemical and metallurgical industries.
The giraffes standing protectively on either side of the crest are known for their calm and non-confrontational attitude while the ever watchful lion of Africa reclining on the base of the crest surveys his territory and its resources.

In 1995/96 coal technical events began taking place and by 1999 seminars were well attended and more papers were being submitted. One of the coal colloquia had become an annual one-day event – The South African Coal Science and Technology Indaba with overseas specialists giving keynote speeches.

Delegates and the interest in coal continued to increase. Coal courses were introduced and developed in co-operation with the University of the Witwatersrand. These included modules, colloquia and lectures from local and overseas specialists.
It was during this period that the Foundation was awarded the tender for researching the methane emissions from mines for the International Country Studies on Global Climate Change funded by the USA. A team of South African specialists under the umbrella of the Foundation produced an internationally acclaimed definitive report on ‘methane in mines’ recognised as a leading world class research document.
By 2000, conference organisers managed the Coal Indaba Conferences which now took place over two days and the extensive administration required the services of a permanent secretary.
The FFF began to host a number of other major events. These included the first ‘Junior Coal Mining Ventures’, a review of ‘Coal in the Waterberg Coalfield’, ‘New Developments in Geotechnology’ (with Australian contributions), ‘The Importance of Trace Elements and their Environmental Impacts’ (with American input) ‘Gas in Southern Africa’ in addition to a new series in ‘Energy Reserves and Resources of Southern Africa’.
The Foundation was invited to host a number of senior government delegations and industry personnel from various countries.

During 2001 the FFF became a legally constituted VAT-registered Trust governed by an elected board of Trustees. Central and Regional council members were appointed, strategies developed and the Foundation’s functions confirmed.
The first Annual Banquet was held in November 2001 when the first Prestige Award was given to Dr Ian McRae of Eskom, Chairman of the FFF’s Board of Trustees and the retiring CEO of Eskom.
The FFF has continued to expand and maintain its objectives of networking, sharing of technological information and providing knowledge in this diverse industry. Topics include coal, oil, gas, methane (including coalbed methane), alternative energies, global climate change and fossil fuel usage.
The Foundation is now recognised as fulfilling not only a vital role in South Africa and the region but is acknowledged by international specialist organisations such as the IEA Clean Coal Centre and the World Coal Institute amongst others. It offers an independent multi-disciplinary forum for the development of national policies and not only co-ordinates innovative projects including research but is also committed to on-going education through conferences and courses.

The Fossil Fuel Foundation (FFF) is a non-profit Trust made up of individuals from industry, government and non government organisations, academia and technology – all of whom have an interest in coal and energy. Multidisciplinary topics are covered including those in the coal producer and user sectors, clean coal technologies, alternative energies, conventional and unconventional gas, coalbed methane, health and safety, climate change and the environment. FFF conferences, academic and industrial courses and colloquia provide specialist information on these topics and the FFF membership provides a network throughout the entire coal, carbon and energy sectors both within South Africa and across the region.

The Fossil Fuel Foundation (FFF) is a non-profit Trust made up of individuals from industry, government and non government organisations, academia and technology – all of whom have an interest in coal and energy. Multidisciplinary topics are covered including those in the coal producer and user sectors, clean coal technologies, alternative energies, conventional and unconventional gas, coalbed methane, health and safety, climate change and the environment. FFF conferences, academic and industrial courses and colloquia provide specialist information on these topics and the FFF membership provides a network throughout the entire coal, carbon and energy sectors both within South Africa and across the region.

The FFF is working towards a low carbon economy and, in so doing, is active in promoting the use of coal in the most responsible manner possible during the medium to long term period of transition to alternative base load energy sources.

In recent times the following actions have been taken: 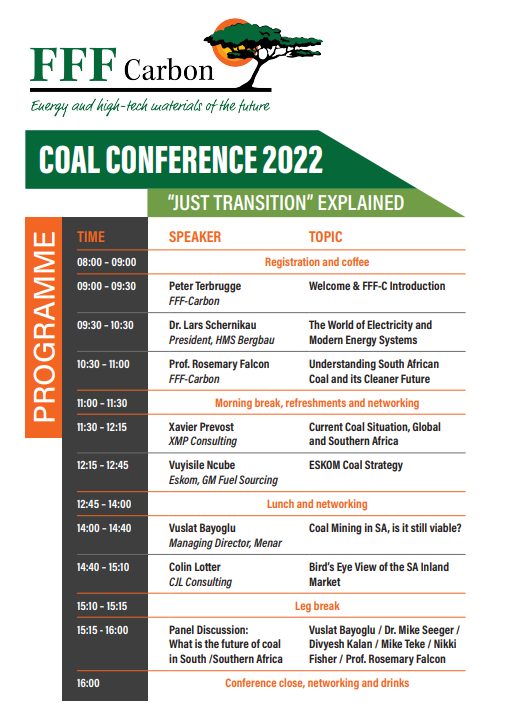